The rapidly increasing spread of modern electric motors with frequency converters makes partial discharge testing indispensable – because it is the only way to reliably assess the suitability of your motors for frequency converter operation and to detect critical insulation weaknesses.

With the increasing importance of partial discharge testing we hear two questions more and more often – which we are happy to answer:

The measurement technology in combination with high-frequency filter technology makes the system extremely resistant to interference. Therefore the system is ideally suited for use in the field or in production.

The partial discharge measurement (filtering and analysis) is fully integrated in the MTC2/MTC3. Only the decoupling (measurement) of the actual partial discharge signal takes place outside the test device. This is necessary to measure as close as possible to the winding and to adapt optimally to the respective measurement situation. The test on an open stator winding is realized with a highly sensitive measuring antenna or on a completely mounted motor with a special coupler. Both the antenna and the special coupler can optionally be connected to the MTC2/MTC3. Thus you are optimally equipped for any measurement task.

The further development of the antenna makes the measuring system even more sensitive than ever before. Any partial discharge that occurs is clearly visible and has a sufficient signal-to-noise ratio.

The partial discharge measurement at an open stator winding is performed via a highly sensitive measuring antenna which is put inside the test object or placed close to the test object. 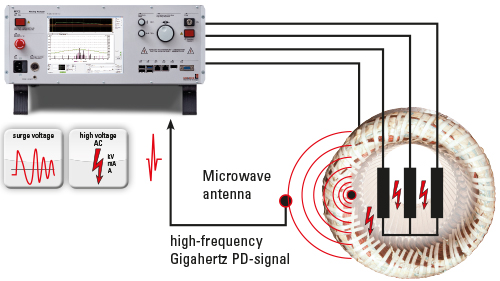 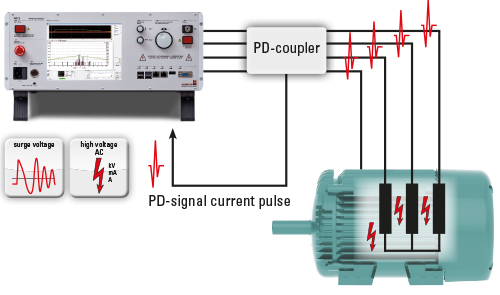 The test is performed either manually or fully automatically. In manual mode, the operator increases the voltage continuously while monitoring the partial discharge signal.

Automatic operation enables the analysis of all three phases fully automatically via a test sequence. The following values are determined per phase:

In this case it is also not necessary to run the full ramp. If it is necessary to quickly differentiate between “GO” and “NO GO” in production, it can be operated with a preset test voltage.

The following diagram shows the beginning of the surge voltage oscillation (yellow) and the partial discharge pulses (red). 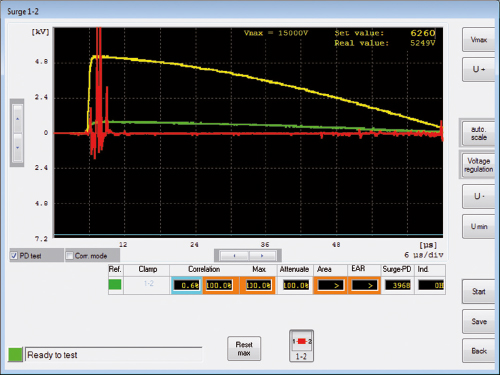 The test is performed automatically via a test sequence set beforehand. A ramp function is applied, in which the test voltage is continuously increased. As soon as the first partial discharges occur, this voltage is stored as  PDIV
(inception voltage).

Next, the voltage is reduced until the partial discharge disappears. This point is identified as PDEV (extinction voltage) and also stored. Due to preferably short test times in production the partial discharge’s intensity can also be determined at a preset voltage. Thus it can be quickly distinguished between “GO” and “NO GO”.

In addition it is also possible to perform the test manually. Here the operator continuously increases the voltage while monitoring the partial discharge signal. 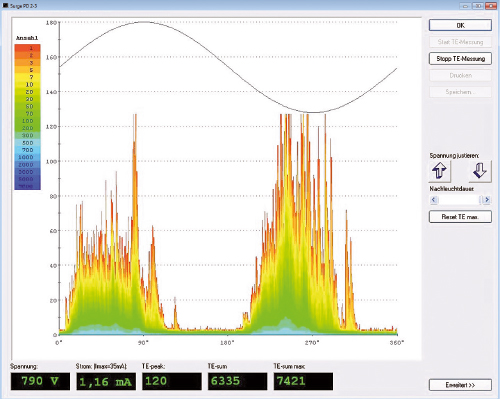 The VoltageAnalyzer – measuring accuracy at its best 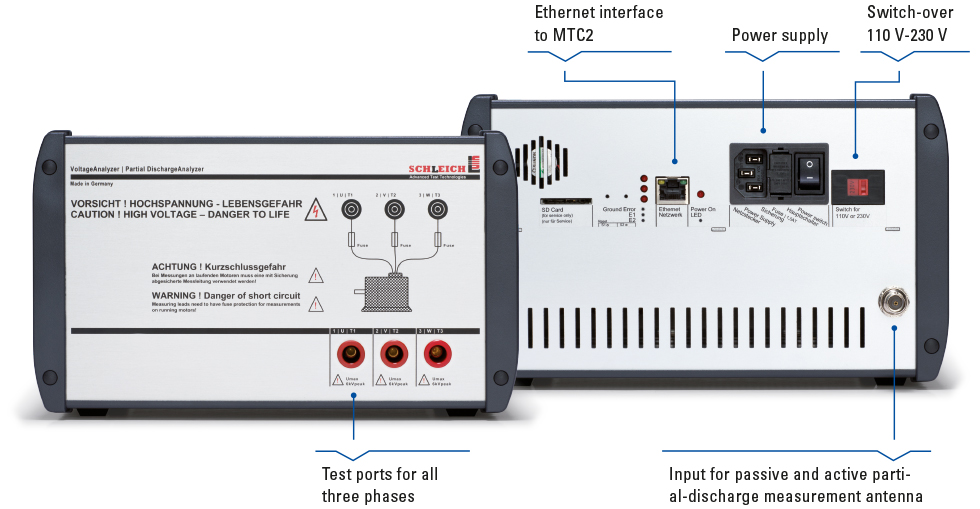 With the VoltageAnalyzer, voltages and voltage peaks can be measured right where they occur, e.g. in the motor terminal board or right at the winding connections.

It may happen that the voltage measured in the surge tester does not exactly match the voltage at the DUT. This is caused by the fact that the unavoidable lead inductances and capacitances between the test leads can change the voltage curve of the surge signal on its way to the DUT.  This effect becomes more intense the steeper the surge pulse rises.

For testing three-phase motors or stators quickly and without re-clamping, the VoltageAnalyzer has three test ports. These are connected directly to terminals U, V and W of the test object via the shortest possible test leads. The test-point switch-over between the three test connections in the VoltageAnalyzer is fully automatic and synchronous to the surge test. 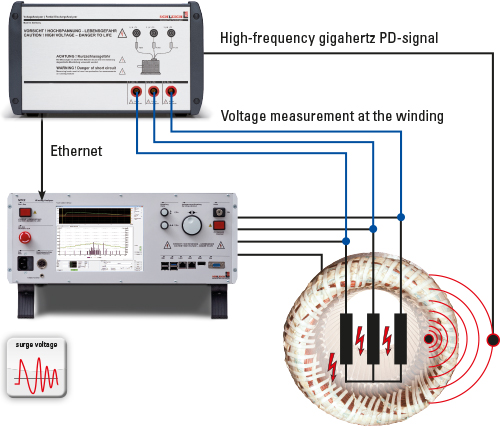 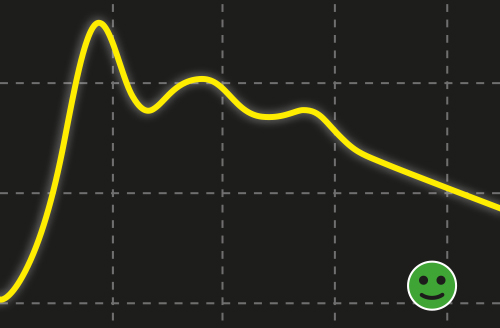 Surge impulse measured by the VoltageAnalyzer 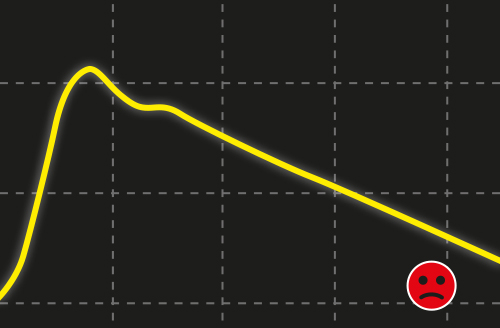 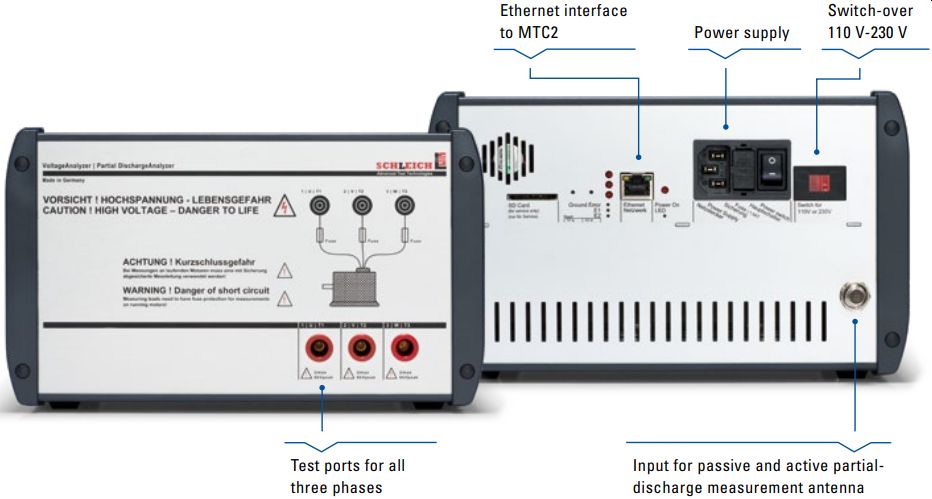 The state of the art winding tester.

▪  interfaces for automation such as PROFINET, EtherCAT, TCP/IP …
▪ interfaces to ERP, MES and CAQ systems …

Intelligent probe up to 6 KV

Precision measurement of the surge test directly at the winding. 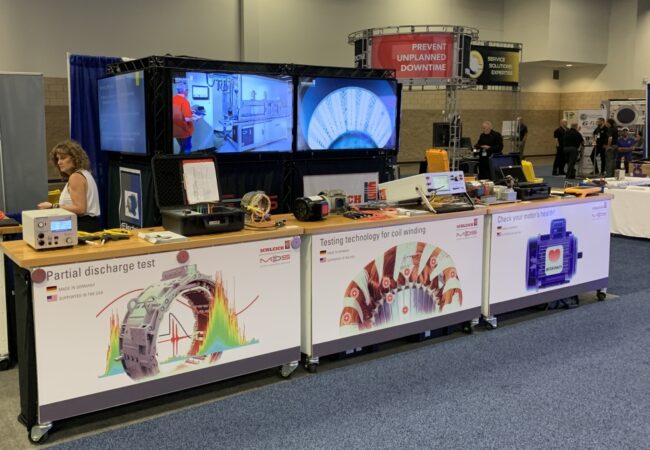 The EASA Convention 2021 in Fort Worth, Texas

Which procedures can be used?
How do I achieve high-quality, consistent results? 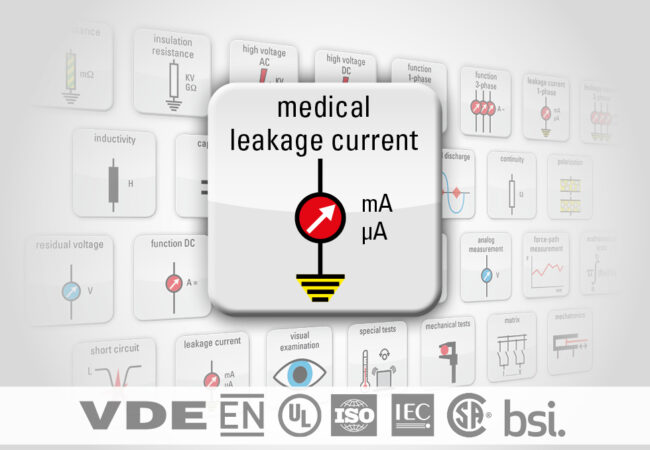 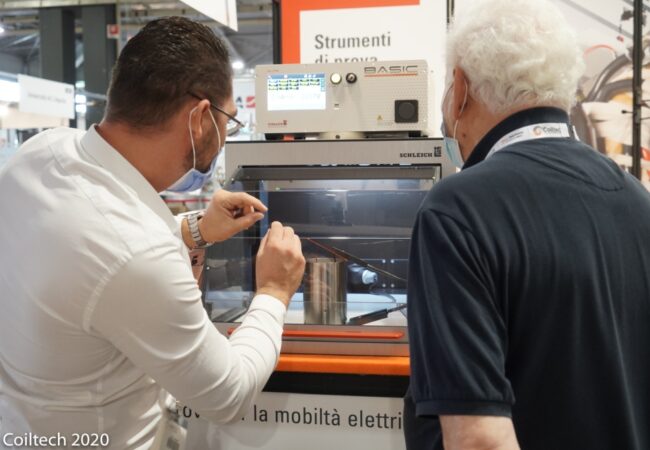 SCHLEICH at Coiltech Italia
Trade shows in the year 2020

It’s nice to hear some good news about trade shows! 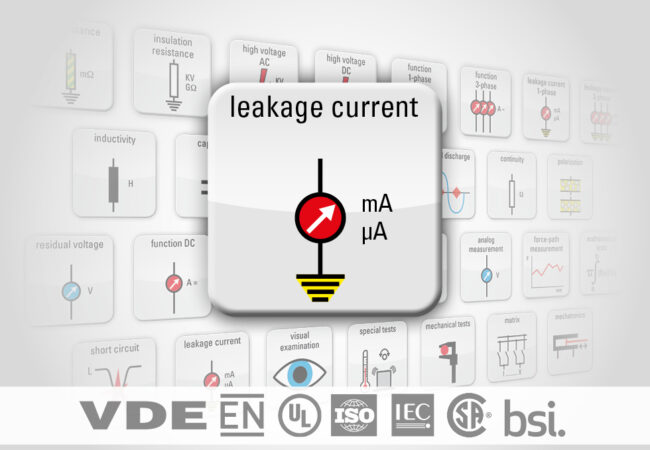