In most cases the high-voltage test is performed at test objects with capacitive parts. As an example the picture shows an electric motor at which the capacities are between the windings and the enclosure. The bigger the motor the bigger are usually the capacities.

Theoretically seen the high-voltage test is thus performed at a RC element. This RC element is the  idealized form of the ratio at the test object. 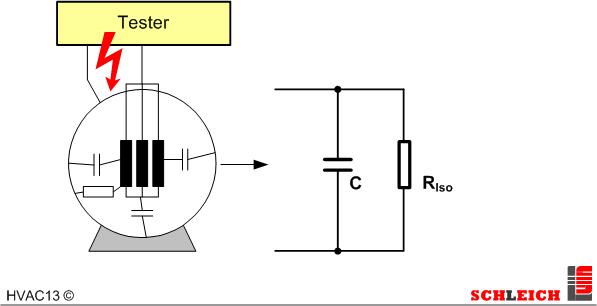 The test object has an insulation resistance between both test points. This is the resistance Riso. This resistance is often quite high and has a value of some 100Mohm and higher. In addition the test object also has a capacity between both test points. Capacities occur between insulated metal surfaces. The bigger the surface and the smaller the distance of the metal surfaces towards each other the bigger is the capacity. In an electric motor for example the windings form one metal surface and the sheet packages the other. Thus the bigger the motor the bigger are the surfaces and thus the capacity.

In most cases the capacitive reload current is no error but a current caused by physical laws that cannot be avoided. However, it does not often demonstrate a quality characteristic. Of course, the current must not be too high but it is not a good statement regarding the quality of the insulation.

The current that flows during the high-voltage test is thus an apparent current. It is composed of the active part and the blind part. At testers with an apparent and an active current measurement the often disturbing blind current can be filtered through a capacitor. Thus only the apparent current, i.e. the current which only flows through the resistance, is measured, evaluated and displayed.

The following pictures show the high-voltage U and the phase-delayed advancing current I. Testers like for example the GLP2e/ce, the GLP3-2000 or the MTC3 are able to measure current either as apparent or as active current. 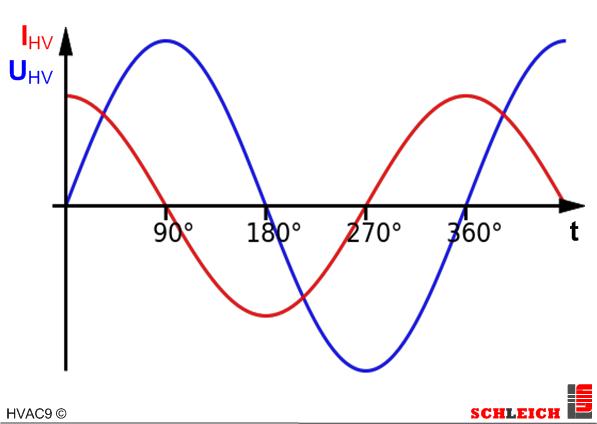 HV-AC with phase-delay of the current 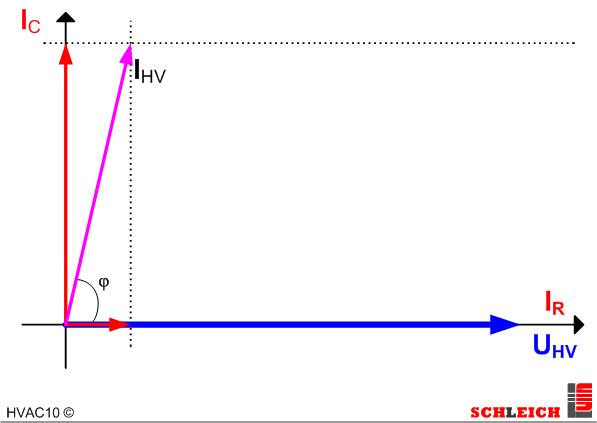 The disturbing part of the capacitor can be also eliminated by a DC-high-voltage test.